By Morgan Sjogren in The Gulch Issue 9 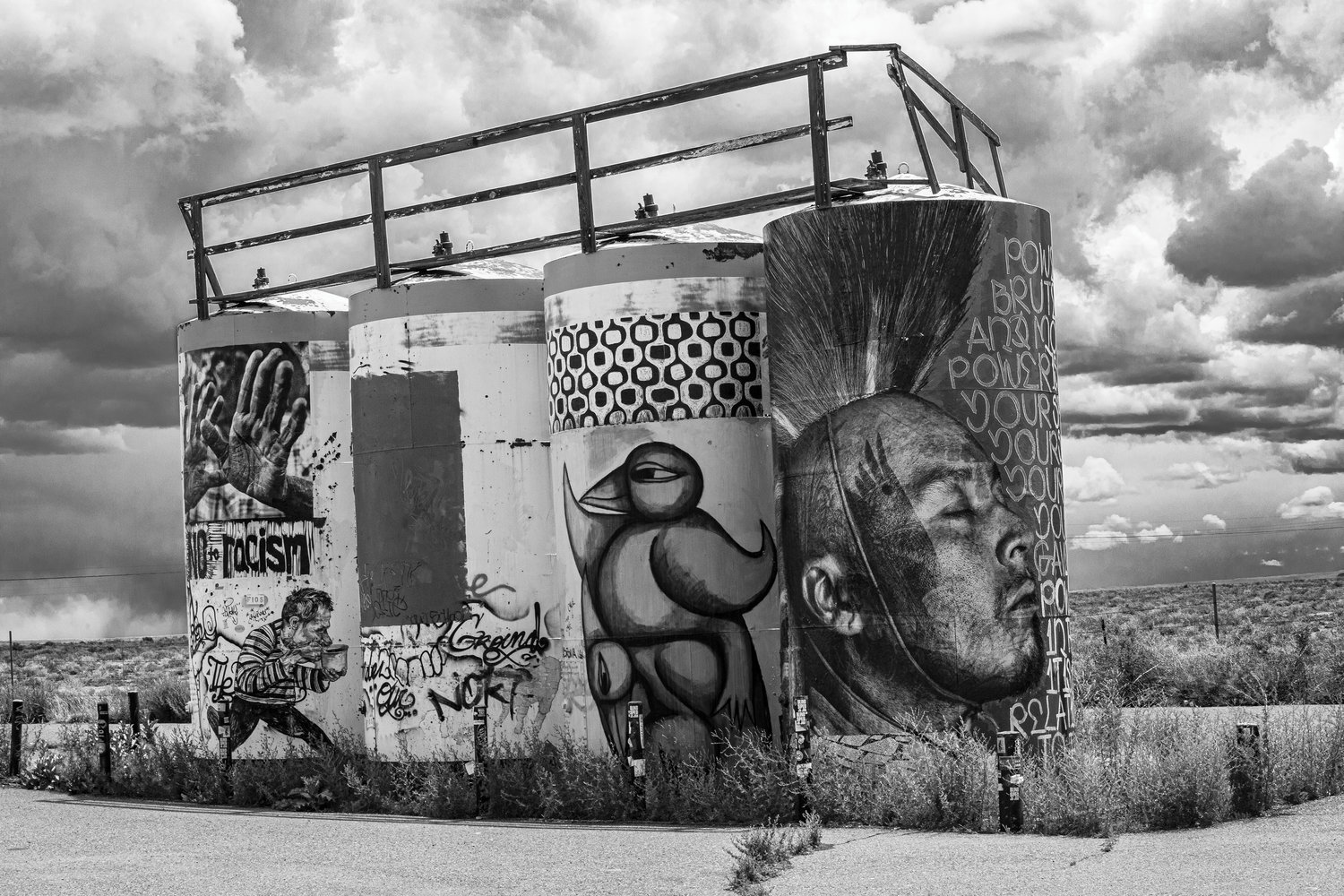 Cruising down the long lonely highways of the Colorado Plateau there are often more billboards than cars, demanding the attention of a captive audience while blocking the view of the surrounding sandstone canyons, cliffs and spires. The scene always makes me wish I could call up Doc Sarvis, a fictional crusader in Edward Abbey’s The Monkey Wrench Gang, for some “night-riding on a routine neighborhood beautification project, burning billboards along the highway.”

Amidst the mostly appetite and spirit depressing chain fast food signs there are attempts to make cultural connections, like the Burger King WW II Code Talkers Exhibit in Kayenta. However, my travel weary eyes are rejuvenated each time I spot a burgeoning collection of colorful road art with vigilant warnings about an invisible serial killer.

“Radioactive Pollution Kills. It’s time to clean up the mines.”

The protester, a bright yellow billboard, never tires of standing tall with its message held high. Located off HWY 89 between Flagstaff and Page, it is strategically adjacent to artwork created by local physician and artist Jetsonorama (Chip Thomas), whose art can be spotted on billboards and buildings across the Navajo Nation. “While many people may be aware of the invaluable contribution of Diné Code Talkers during World War II, few are cognizant of the contribution of Diné uranium miners towards the end of WWII and during the Cold War,” Chip explains. “Anglos first discovered uranium on the reservation in 1943. Diné miners worked over 500 mines on the reservation until uranium prices dropped in the mid 1980s.”

The Colorado Plateau has a dirty past and a deadly secret. There are over 500 abandoned, defunct, and unsealed toxic Uranium mines that have never been cleaned up on the Navajo Nation. During the Cold War 5 million pounds of “yellowcake”, that is, 90% of nuclear materials were drawn from Diné land, making the U.S. the leading provider of this radioactive material by 1956. According to Chip, “In the 15 years after the uranium boom the cancer death rate among the Diné doubled from the early 1970s to the late 1990s. During this period the overall U.S. cancer death rate declined.”

The same beautiful natural features that attract our admiration also stand above high concentrations of Uranium. Today public land boundaries continue to be drawn around sources of Uranium for potential extraction and processing despite the fact that it is currently not even profitable to mine this yellow poison. It is no secret why the boundaries of Bears Ears National Monument were redrawn. In 2018 I staked a mining claim in the areas removed from the Monument, hoping it could serve as a conservation tactic to block actual Uranium mining. However, in digging beneath the surface with my own hands into the world of this toxic mineral, I learned that future undeveloped mines are only a fraction of the problem.

The Canyon Mine near the Hopi Reservation and only 12 miles from the Grand Canyon South Rim continues to pump contaminated water despite not producing any ore in decades. White Mill Mesa, owned by Energy Fuels, is the only operating conventional Uranium processing mill in the U.S. It’s only 3 miles from the Ute Mountain Ute Reservation, 20 miles from Bears Ears and the towns of Bluff, Blanding, and Monticello, where nearby groundwater is affected. With a half-life of 4.5 billion years, even closed mines will continue to pollute surrounding water sources, affecting the 40 million people who depend on water from the lower Colorado River basin. There are no protective barriers in place to defend nearby residents and there are no signs warning visitors about these hazards. 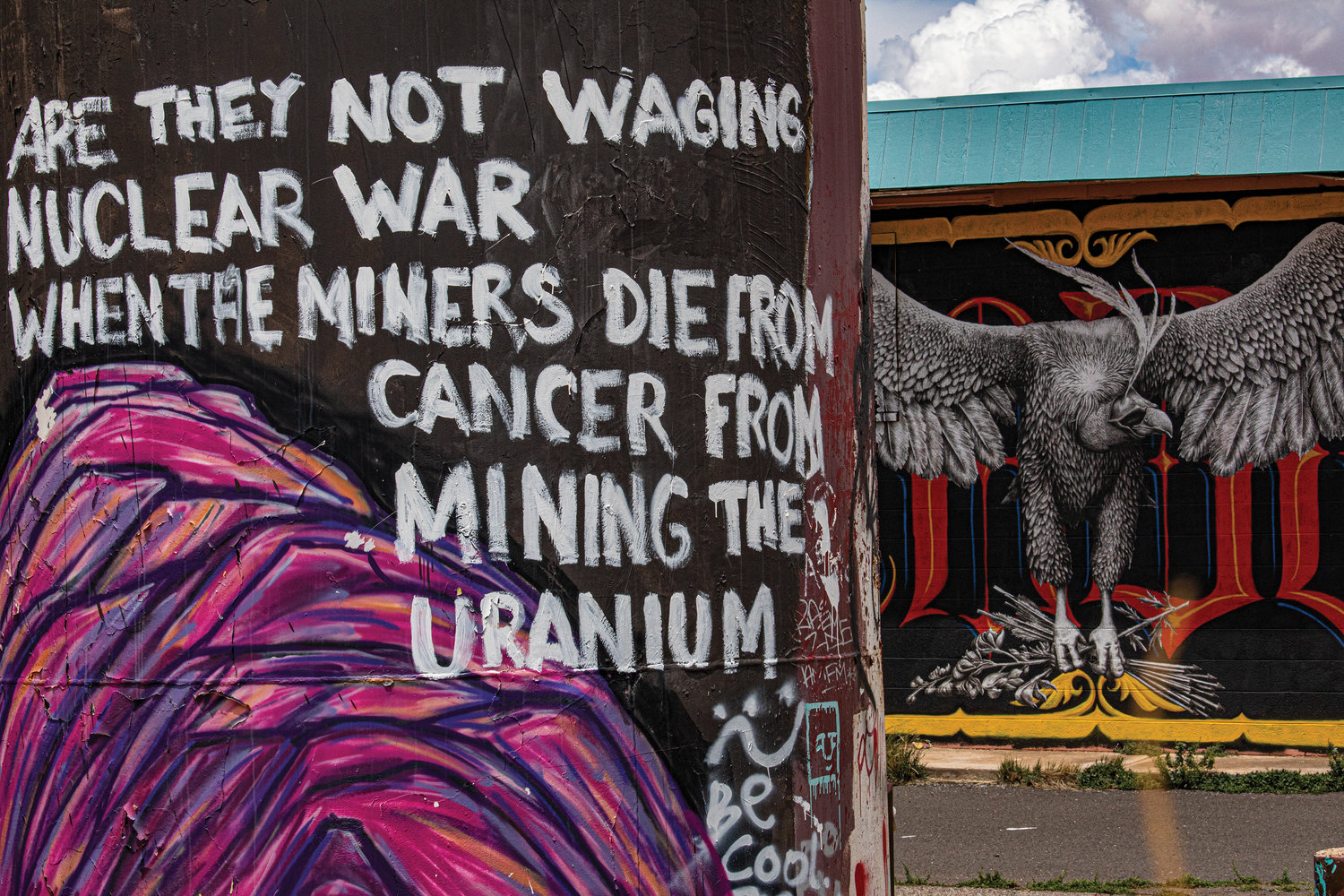 Arizona artist, Jerrel Singer, whose murals adorn water tanks and walls between Cameron and the Grand Canyon, explains, “The effects of Uranium mining are invisible. The government seems to think that a fence will solve its problems. My family are ‘Downwinders’ and have been affected by the nuclear testing they conducted in Nevada, which gave my once healthy dad deadly cancer. My art references this and showcases the beautiful land, but knowing that some of is still dangerous, I cannot go home to see my grandparents’ place, for the wind blows in that direction from the mines.”

As you drive through the desert, look closely: the “ugly highway” so described by the Monkey Wrenchers as they tossed beer cans out the car window, is transforming into a gallery of protest art. The corporate and government desecration of tribal and public lands is being recycled in a rebellious activation of the 1st Amendment. The highways through the Navajo Nation are evolving into perpetual exhibits of discontent calling motorists to action—to join the march. 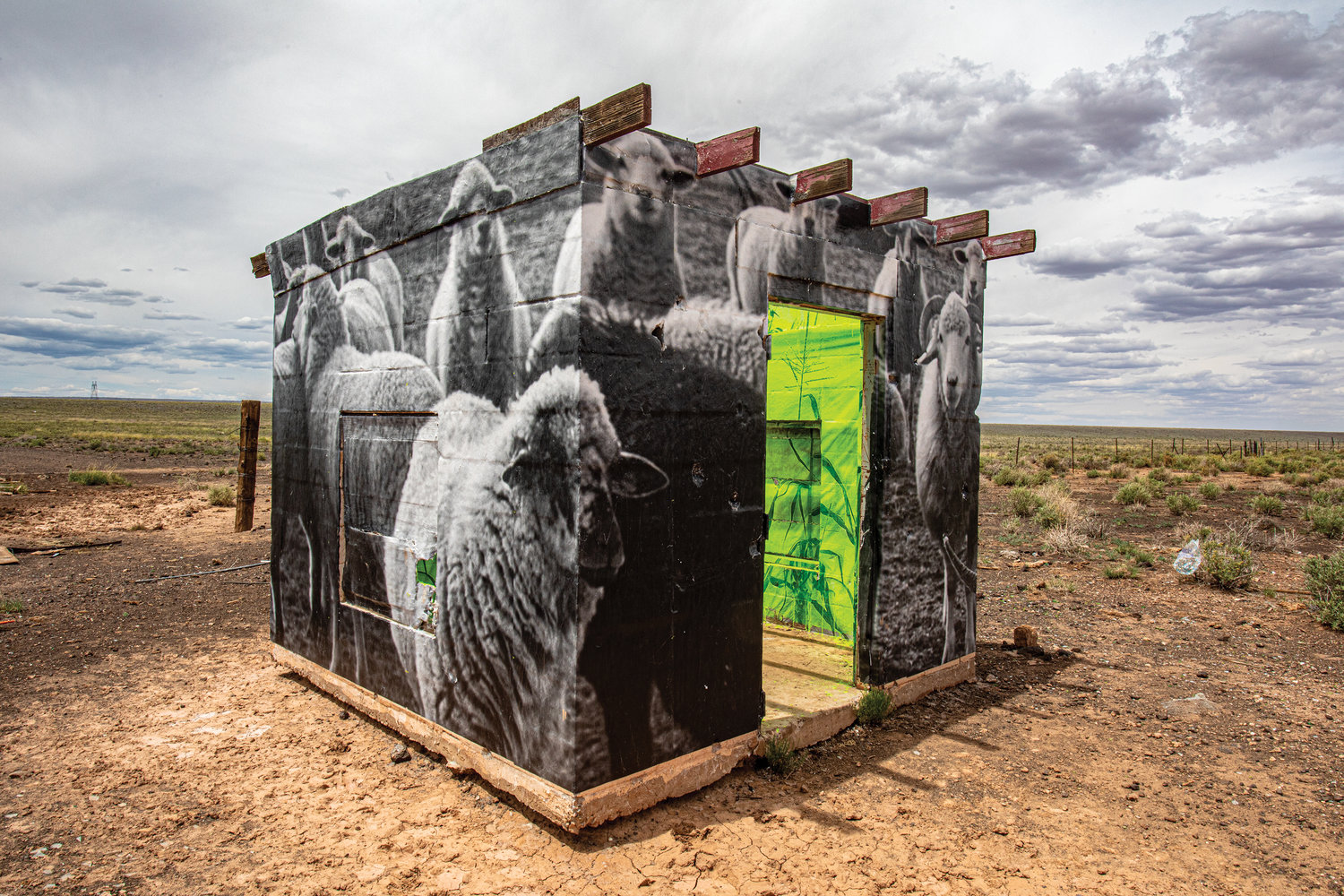 The Green Room, the latest piece by Chip, silently leads the charge. The square abandoned building glows neon green from within its outer walls plastered with an image of black and white sheep. Chip dubs the piece: “a place of meditation + contemplation.” He further elaborates about his inspiration for the piece: “As a physician at a small clinic on the Navajo nation since 1987, many of my patients have suffered and continue to suffer the effects of uranium mining. I asked a co-worker whose father worked as a uranium miner in the mid 60s and who died of a uranium- related cancer if she’d share with me any memorabilia she had of her father from that period. Her mother also died of a uranium-related cancer and she has an older brother presently suffering from a uranium related cancer.”

With the doorway wide open, The Green Room’s hypnotic neon glow set against the muted pink and brown striations of the Painted Desert tugs on your curiosity, and whispers across the road, “Come, find out.” And so on a recent drive to Flagstaff I pull over in front of a dilapidated and abandoned trading post, and crawl through the opening in the red wooden fence. The pause from the long drive to examine Chip’s bold and gritty artwork is meditative in its own right but my mind finds no stillness. Rather, it picks up speed. If each of the 500 abandoned uranium mines were marked with neon green biohazard billboards, would we all sheepishly keep driving?

The art will continue to speak for the families, land, and future so drastically impacted by uranium mining, but more voices are needed. To learn more about how you can take action, The Grand Canyon Trust is a tremendous resource for educational materials, volunteer opportunities, and signing petitions. Beyond speaking with our votes, we can also write letters to our elected officials and representatives urging them to support relevant legislation, like the Grand Canyon Protection Act that aims to halt mining in the Grand Canyon forever. Lastly, the BLM and Forest Service both include public input in their management plans. It is critical that public land owners (all of us) participate in this process, especially during planning periods, by writing letters and attending public meetings.

Morgan Sjogren runs wild with words and lives outside on the Colorado Plateau. Her Four Corners-inspired writing is focused on public lands, human-powered adventure and exploration. She’s authored three books: The Best Bears Ears National Monument Hikes, Outlandish: Fuel Your Epic, and The Best Grand Staircase National Monument Hikes (due for release in 2019).